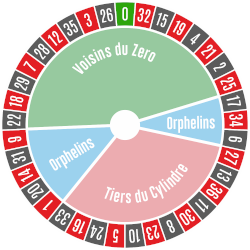 Roulette is said to have begun in French in the 17th century and the creation attributed to the mathematician, Blaise Pascal. Interestingly, the first “zero” slot was only added to the wheel in 1842, which was the first time that the wheel gave the house an edge.

During the 19th century, the game spread worldwide, with adaptations such as European and American Roulette sprouting from the original. Although the French and European Roulette games still remain two to having one green “zero” slot, the American variation added another zero (00) to increase the house’s edge.

The wheel features 37 numbered slots which include numbers from 1 to 36 and a green 0, with the numbers alternate from red to black as we move around the wheel. An unrelated, but interesting fact is that if you add all the numbers of a roulette wheel together, they equal 666 – which is why roulette is said to be “The Devil’s Game.”

French Roulette is similar to the other versions of the table game, however it does allow for certain special bets that you will not find anywhere else. The game is more complex to the American and European versions, due to the fact that some of the potential wagers are many-bets-in-one.

In French Roulette, you will find all the standard betting options that you find at any wheel around the world, but they have some additional options along with two other rules that are specific to this variation.

Inside Betting refers to the bets you place on individual numbers, whether that be a single number or a combination of adjacent numbers. The most popular Inside Bets are the following:

Straight
A Straight or Single is a bet placed on just one number, where you are paid at odds of 35 to 1 if you hit.

Split
A Split is a bet that covers two numbers which you will place across the intersection line. The numbers have to be adjoining and you can split either horizontally or vertically, examples being 12/13 and 26/27. This bet pays at 17 to 1.

Corner
This is a bet on four numbers in a square layout on the betting area. You place chips on the intersection between the four numbers, so the chip lies partially in all four squares. This bet pays out at odds of 8 to 1.

Outside betting is when you place a bet on a group of numbers. The following are all the possible Outside Bets:

Red or Black
This is probably the most famous roulette bet of all and many players will exclusively play this bet. Correctly predicting whether the ball will land on Red or Black will pay out an even amount to what you bet.

Odd or Even
Similar to the Red or Black bet, you will be awarded and equal amount to your bet, by correctly predicting if the ball will land on an Odd or Even number.

Column Bets
This time, you will be betting on one of the columns in the betting area, there are three columns meaning the pay-out would be 2 to 1.

Call Bets, or Announced Bets are exclusive to the French version. You will be placing bets on the ball landing in a certain section of the wheel, there are three different options.

Voisins du Zero
This phrase translates to “neighbours of zero” and represents all the numbers between 22 and 25 on the wheel (17 numbers). You will be required to bet nine chips on a combination of splits, corners and trios.

Le Tiers du Cylindre
This phrase translates to “thirds of the wheel” and represents the numbers opposite zero, ranging between 27 and 33 (12 numbers). This bet costs six chips as you will be placing six split bets to cover these numbers.

Orphelins
This phrase translates to “orphans” and represents the eight numbers outside of the previous two bets. This represents eight numbers and will cost five chips, which will be four splits and a single additional chip on the number 1 slot.

En Prison
This rule comes to play when the ball lands in the zero slot and you’ve placed a bet on an even money chance, such as Red/Black or Odd/Even. Use this rule and your stake will remain on the table for the next spin. If your bet lands in the appropriate slot, your stake will be returned.

La Partage
Similarly to the En Prison rule, this applies when the ball lands on zero when you’ve got an even money bet. In this case, you will receive half of the stake back.

The house edge varies in French Roulette depending on the type of bet being placed. The edge is 2.7% when betting on any non-even money shot, but lowers to 1.35% for the even money bets. This is a favourable house edge, since the American variation with two zero slots, has a 5.26% house edge.